Every Racer That Makes It To The Sofa Is A Winner!
Home >  Resources >  Health >  Poison - Toxins >

THE DEADLY POISONING OF SNAIL BAIT 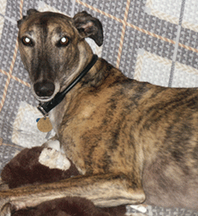 The Loss of Jake, Our "Forever Great"

The following story about the accidental poisoning of a dog due to the misapplication of snail bait is unfortunately all too true. If you love your grey you should take this sad message to heart and discuss the topic with anyone who has access to your greyhound children.

Attack of the slugs
The story began in early spring when our new gardener said we had slugs eating the Lamb’s Ears in the front yard; he asked that I get some snail killer pellets. I dutifully bought some and very carefully stored the unopened box where the greyhounds and my rascally beagle could not get to it. When the gardener asked me to get the bait, I confirmed with him that it was for the front yard only.

When I hired him a couple of months before, we discussed greyhound safety issues including the gate and not using anything dangerous in the backyard or near the dogs. He also knew that the prior gardeners were not even allowed in the back yard unsupervised. When I left for work on that Monday morning, I left the snail pellet box visible in the garage. It never occurred to me that from such a simple act, a terrible sequence of events that would unfold.

Jake joins the family
For those of you who don’t know us, three beautiful greyhounds and a beagle named Spidey called our house their home. There is Patty the Princess who came to us after recovering from a broken leg, Alex, our blue fawn boy, and our sweet and very special boy, Jake, who had been optimistically given the track name Forever Great.

Jake had picked me out at the Pokemon-themed Retirement Day in August 2002. He was just 2 years old and very frightened. I will always remember how he stared at me over his muzzle with those sweet, piercing eyes that called to me. I felt a strange attraction to him and just needed to take Jake, then called Rapidash, home with me. Jake was the first and only foster that I knew was a “foster to adopt” on the very first day I met him. I spent weeks gently pursuing him around the yard as we played a game of hide-and-seek before every walk because he was too shy to come to the leash. Slowly, and with much love and patience, he finally decided we were OK and accepted us as his human companions.

Over the next year and a half, Jake blossomed into the most wonderful and loving dog. There was something very different about him. He seemed like an old and wise soul. He was a free spirit and always happy. He loved to play with his stuffed animals and he often toted a piece of firewood like a cigar (see photo above). Besides being an astute observer of all activities, he was a master and stealthy counter-surfer.

He was able to steal food, like marinating chicken breasts, right out of the bowl and off the counter without either the cook or the beagle noticing. Jake always was watching and curious about anything that changed in his yard, so it is no surprise that those little brown snail pellets would look like something to check out. In some ways, it was probably Jake's acute awareness of his surroundings that made him the tragic victim of what was to happen next.

Tragedy
From here the story hinges on speculation. The gardener left at 2:30pm. When our son and his friend went to the gym at 4pm all was well. But when they came back in less than two hours, Jake was having seizures. They futilely searched the house trying to determine if he had eaten something, but found nothing. They couldn’t get in touch with me immediately and tried desperately to find a vet, but to no avail. I got home a bit later and our Forever Great Jake was dead within minutes of my arrival, before we could even get him to an emergency vet clinic. After piecing together the puzzle, we found that our gardener had spread the snail pellets all over Jake’s back yard. Jake apparently tasted them, maybe only one or two, and the die was cast.

We still can’t believe that this happened after we had carefully hired a gardener we believed to be professional and experienced. All we know now is that this was a senseless loss of a beautiful, healthy and loving animal companion and it all happened because a gardener thought he knew better than the manufacturer who put those dire warnings on the box. When I called the gardener that night, he said he was very sorry that this happened and apologized for our loss, but also said he'd been using snail killer pellets in yards with dogs for years with no ill effects.

A lesson learned
Needless to say, he is no longer our gardener; there will never be another gardener trusted to be in our back yard. However, none of that helps in the least to take the sting out of the horrible pain Jake went through in his last hours or the loss we feel today, and will continue to live with for a long time. Those of us who loved Jake during his short life and were with him in his horrible death will never forget what happened.

We want to let everyone know that no matter how vigilant you are, things can and do happen. Before this happens to your beloved companion, take some time to talk to your gardener and go through your houses and garage. Get rid of the dangerous chemicals safely at the next community toxic cleanup day. Take a minute and think about what is more important to you--a few chewed up plants or petting your beautiful greyhound? Today I wish I had been given that choice.