Every Racer That Makes It To The Sofa Is A Winner!
Home >  Resources > 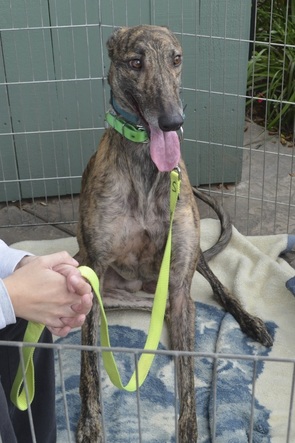 Several years ago a middle-aged man approached our greyhound pen at a local pet exposition and proceeded to “enlighten” those gathered around with his fountain of “knowledge” about greyhounds.

“They need a lot of room…they’re hyperactive…they don’t make good pets…they’re not intelligent dogs,” he said, “they can’t be trained.”

At that point I turned to the eight dogs in the pen; they were a combination of my dogs and former fosters of mine.

“Sit,” I commanded as I held up a treat. Eight dogs sat simultaneously, and one know-it-all was silenced.

Can greyhounds learn to sit? You bet. I don’t recommend making greyhounds sit for long periods of time because their large thigh muscles do make it a little harder for them to sit. But all but one of the nearly 70 fosters who have passed through our home have learned to sit (that one does a “down” instead). It usually takes less than a week.

Teaching your grey to sit has several benefits:

• The mental stimulation is healthy for the dog.
• The dog enjoys the praise and interaction with you.
• The process increases the caretaker-pet bond.
• The discipline makes the dog a more enjoyable companion.

The command is the first step to teaching “down,” “shake hands,” and other commands.

Steps to a sitting greyhound

You can train your dog to sit by yourself, but we have found that it is easier my husband and I to work as a team. Here’s how we do it.

One person stands in front of the dog holding a treat just above the nose of the dog.
The other person kneels beside the dog and places one arm around the back of dog, right at the “knees,” and the other hand lightly on the dog’s chest. While first person says “sit” and moves the treat back toward the ears, the other person gently pushes in at the knees and back on the chest. The dog’s nose will follow the treat; as his head goes up, his rear end goes down. Give the treat and praise him profusely.

The keys to training are repetition and patience. Repeat the above process three or four times per session and have four or five sessions per day. We practice at each mealtime (theirs and ours), at bedtime, and sometimes during commercials when watching TV.

Keep the sessions positive and SHORT. Don’t practice the command more than four or five times. Give lots of praise, pets, and hugs: make it fun.

As the dog begins to understand, you can quit putting your arm behind the legs. Instead, just lightly touch the dog’s rear end as a reminder (don’t push down!) when you give the command. Continue to use the treat to move the dog’s head up and back. Eventually try without any clues.

Finally, if your greyhound doesn't seem to be getting it, don’t despair. We have found that just as we think the dog will never learn, all of a sudden it “clicks” and he will “get it.” It usually happens around the fifth or sixth day. Remember, the keys are repetition and patience…and LOTS of praise.

Greyhounds can learn to sit.