Every Racer That Makes It To The Sofa Is A Winner!
Home >  Adopt >

We never discovered the identity of the puppy's sire but know for sure he was a greyhound! We owe a big thank you! to Judy Calame, who offered to be Carlee's foster mom and then hosted the litter of six until they were adopted.  Judy had successfully overseen several dog and cat deliveries and puppy training in years past so was the perfect foster mom. A special thank to Joe Ark Sun & Emily Tse for setting up the puppy cam in Judy's puppy corral. The puppy cam became an immediate sensation and was viewed by curious and sometimes possessed puppy watchers from around the country and even some from around the world.

Carlee gave birth to 5 males and 1 female on Friday, May 31.  We named them Nancy Drew, Simon, Gemini, Merlin, Eben, and Bentley. Their birth weights were between 355 and 506 grams (the female was 425 grams--see her in the scale below). Total weight of pups: 5.8 pounds! Plans for a natural home birth were thwarted when it was discovered that one of the pups was blocking the exit. So Drs. Wehbe and LaBraun delivered them by Caesarian section. By early August 2013, all of the puppies were adopted and moved to their new homes where they could get that very special puppy training which included plenty of love and patience!  Our thanks to all of our special puppy adopters, too! Four of the six GreySave pups live in southern California, one in the central coast of California and one in Washington State.  Their adopted names are: Nancy Drew is still Nancy Drew, Simon is now Dolcetto, Gemini is now Diesel, Merlin is now Romeo, Eben is now Simon and Bentley is now Carl. You can see them periodically on our FaceBook page doing very greyhound things.  So many of the greyhound quirks must have been in the genes. 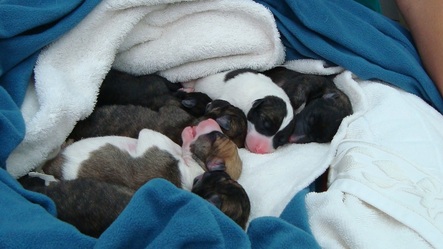 However, raising greyhound puppies is a challenge!!  It is not a challenge everyone would want so we have added some links to articles on Raising Greyhound Puppies

Raising greyhound puppies is no easy task. Check out a couple of online accounts to see what's in store for Judy and new greyhound mom Carlee.

Read this excellent article on Adopt-A-Greyhound
It's located in the right column of the page, about half-way down. Some key points from the article:

• Puppy housebreaking is much harder--puppies take much longer to house train. Also, a puppy can hold his bladder for only one hour per month of life. Are you prepared to let out a three-month old puppy every three hours?

• Puppies can be relentless machines of destruction--their teeth are very sharp, they can destroy an amazing amount of valuable stuff in short order, so they need to be watched at ALL TIMES.

• Puppies are much harder to train than adult dogs--for one thing, their attention span is much less.

• Puppies' personalities develop long after adoption--so you have little chance of picking out the "right dog."

• Adult greyhounds are the better adoption choice for the vast majority of folks.

So You Want to Rescue a Greyhound Pup?

Read this article by a mom who adopted a greyhound puppy. It pretty accurately describes the challenges of raising greyhound puppies. It's important to note, as the article does, that they don't become "45-mile-per-hour couch potatoes" until 18 months of age or so. Prior to that, especially for the first year, they are high energy, high activity, "wild and crazy" puppies. I think that the author does downplay a bit the daily challenges of greyhound puppy rearing. After all, most folks don't want to complain about their dogs. But overall it is well done.

This article addresses AKC greyhound breeding. AKC hounds are a bit different from racing greyhounds, but the section on raising puppies below definitely applies:

[You] . . . need to determine if you really do want a Greyhound puppy. Greyhound puppies can be quite a handful. "People who have adopted older ex-racing Greyhounds are often used to a more sedate dog," says LeMieux.

"But Greyhound puppies are another story. They are often wild and crazy. They are not hyper, but they are usually full of energy for about the first 18 months. As they grow, they get bigger and stronger and faster. Imagine this big dog running around your yard at 30 miles an hour. I've even seen young Greyhounds bank off the house when making a turn! They will sometimes run up behind you, jump on you or run right into you, knocking you flat."

LeMieux also cautions that prospective Greyhound puppy owners be prepared to do lots of training and socializing. "Early training is a must with these rambunctious youngsters. If you have toddlers, this exuberance can be a problem. They can easily knock a little one down without meaning to. Only a knowledgeable dog person should bring a young Greyhound into a home with small children."

You must also have other resources besides knowledge. "Greyhounds are large dogs--to 100 pounds, and as such their space requirements are also large," says Kostic. "Imagine 2-year-old children on stilts and roller skates, and you have a rough idea of a fast-growing Greyhound pup learning balance and coordination. They also eat like large dogs with healthy metabolisms, so the food bill is going to be large, too." 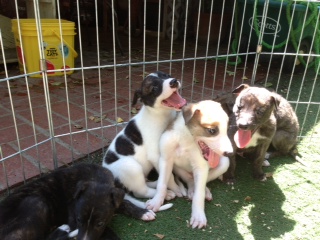 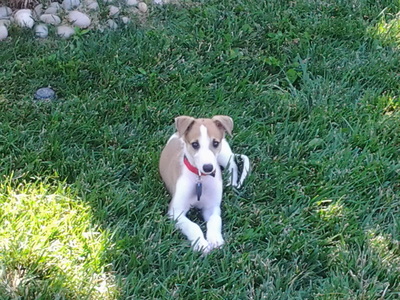 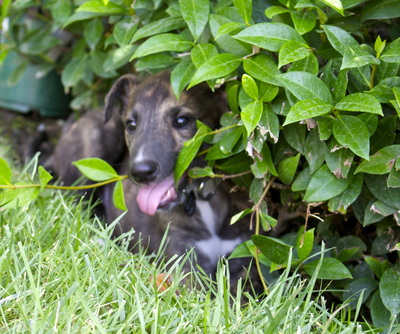 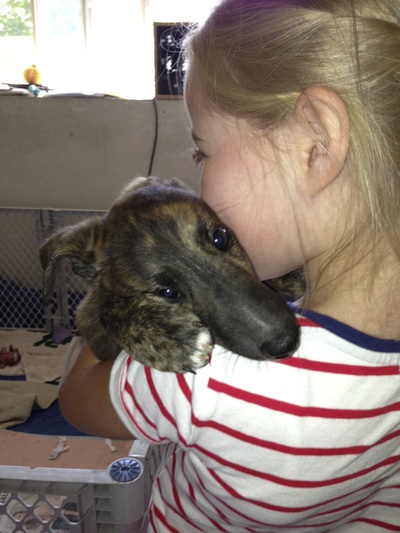 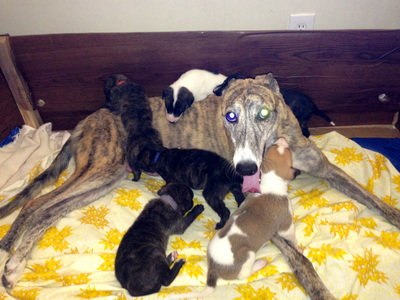